Beyond the Nest Reviews Blackfriars' Anna in the Tropics 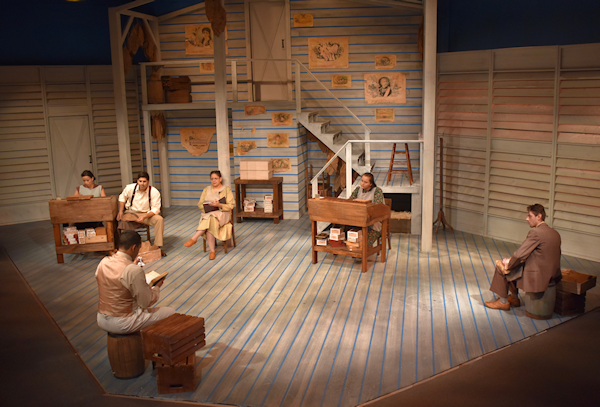 I love when a play highlights aspects of culture and history that have been lost to contemporary times, and Anna in the Tropics does just that.

Written by Nilo Cruz, Anna in the Tropics won the 2003 Pulitzer Prize for Drama. The play takes place in 1929, in the Cuban community of Ybor City, near Tampa, amidst a family whose fortunes – or lack thereof – are  tied to a cigar factory.

As was custom before mechanization, a new lector arrives by boat. Juan Julián, played with smoldering sensuality by J. Simmons, is hired to read to the workers and family members in the factory as they spend their days carefully rolling hand-crafted cigars from dawn to dusk.

The lector chooses to read Tolstoy’s Anna Karenina. As Juan Julián’s voice conjures the fictional Anna, whose essence seems to waft through the factory, enthralling and entertaining workers, the scandalous story begins to sow seeds of discord and infidelity, foreshadowing what is to come.

The cast is splendid. As Santiago, the factory owner addicted to gambling, Adam Rosenfeld creates a character who is both lovable and frustrating. It is clearly his smart, loving, and determined wife Ofélia who holds the family together. Adriana Riano endows Ofélia with both depth of character and a sense of humor. Their daughter Marela, played by Daimarelys Lara, is a dreamer who sees possibilities others can’t understand. When Santiago’s older daughter Conchita (Mary Mendez Rizzo) confronts her husband Paloma (Raul Torres) about his extramarital affairs, then soon begins one of her own, tensions mount as a dangerous tango of three begins. Steamy clandestine encounters and stand-off rivalries augment the tension.

Meanwhile, Santiago’s half-brother Cheché, (Dimitar Kominovski) waits in stealth like a cat ready to pounce, hoping to become rich by introducing mechanization into the factory, of which he owns part, due to Santiago’s gambling. As passions mount around him and within the pages of Tolstoy’s story, reminding Cheché of his unfaithful wife, and as one disappointment follows another, his anger, frustration, and sense of entrapment become his downfall. 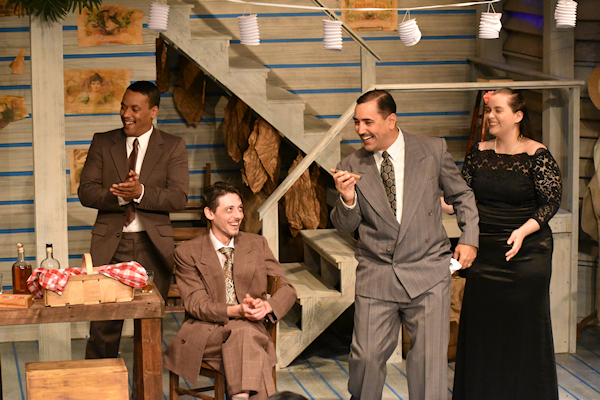 Anna in the Tropics was produced in partnership between Blackfriars Theatre and the Rochester Latino Theatre Company. Allen Wright Shannon made wonderful use of the space, creating a set so realistic you could almost smell the tobacco. Director Patricia Lewis Browne masterfully plays the intrinsic tensions of the piece like a violin, so that the climax is expected…but not.

Anna in the Tropics is a beautiful play filled with hopes and dreams that rise from the tobacco leaves, and are rolled in tight promises, then disappear into the air like blue smoke circles. It is thought-provoking and sweet, with intriguing characters and plot. My husband and I were still talking about it all the next day, we found it so provocative. Did I love the playwright's ending? No. Did I love the play? Yes!

If you enjoy a rich drama, this is one play you should see.

Anna in the Tropics is appropriate for audiences over age 16, and it can be seen at Blackfriars Theatre through September 23.

Photos by Megan Columbo: Top -The Cast of Anna in the Tropics; Bottom - L. to R.,  J. Simmons as Juan Julián, Dmiitar Kominovski as Cheché, Adam Rosenfeld as Santiago and Daimarelys Lara and Marela