Beyond the Nest Reviews CRY IT OUT at Geva Theatre Center 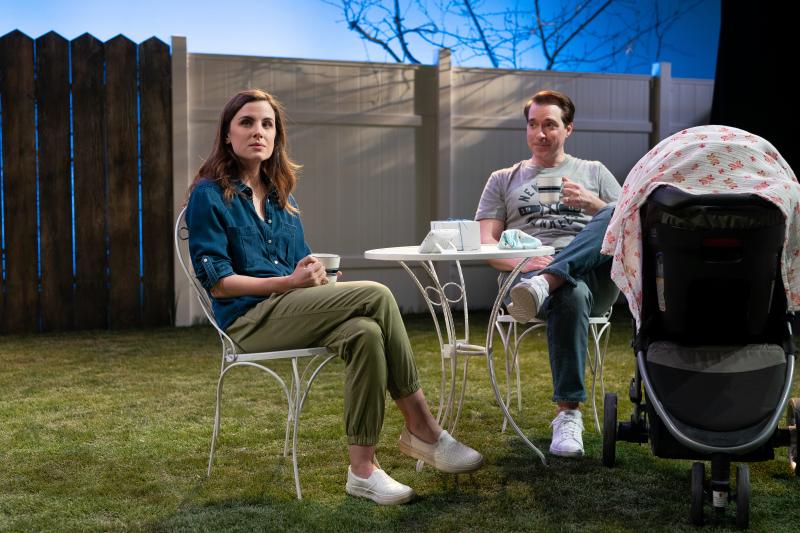 Everyone knows that being a new parent is tough, rewarding work. Cry It Out, a comedy by Molly Smith Metzler, explores the rugged terrain using humor and candor, as she depicts surviving the early days of parenthood, including isolation with an infant, sleep deprivation, postpartum blues, changing spousal relations and returning to work.

Recently relocated neighbors Jessie (Mikaelaa Izquierdo) and Lina (Melissa Miller) befriend each other over the produce aisle on one of those rare parent-of-newborn outings to the grocery store.  Like prisoners starving for adult conversation and interaction, they quickly find camaraderie, support and solace in the daily backyard coffee meetups between their two duplexes, even as they are tethered to baby monitors. Although the two are worlds apart in personality, background and financial stability, their friendship is as solid as the love of each for her child. Their discussion of the extinction method of sleep training, where you let the child cry it out, offers real insight into their viewpoints on parenthood.

The dynamics change when Mitchell (Brian Sgambati), who lives in a big house on the hill and can look down on them, foists his wife Adrienne (Erica Stehinhagen) upon them to assuage concern that his wife is not acclimating to motherhood, and in the hope that they'll inspire her. Adrienne is the consummate career woman and a jewelry designer whose recent commission from Tiffany & Co. comes at a challenging time in her life, when both her clients and her newborn need her.

Anyone who’s ever been a parent – but especially those with young children -- will appreciate and identify with the highs and lows these new parents face. The talented cast and Director M. Bevin O'Gara do a good job of bringing us along with the characters on their rollercoaster of a journey. Melissa Miller gives the funny, feisty Lina real chops, and Micaela Izquierdo as Jessie provides a warm-hearted, mostly-calm  counterbalance to Lina’s sizzle. Erica Steinhagen's Adrienne is seemingly as aloof as her house on the hill. But might there be a soft spot in her heart for her family, despite her steely demeanor? What solution can she and Mitchell devise so their entire family's needs are met?

I found the ending a bit abrupt, but the cast did a fine job of delivering on Metzler’s message that parenthood comes in all flavors. Metzler also hones in on the fact that, at present in this country, there are no easy or reliable solutions to issues such as child care or parental leave, and that most parents must still “go it alone”... unless, of course, they’re lucky enough to find a friend like Lina or Jessie.

Cry It Out is a production of the Kitchen Theatre in Ithaca, and can be seen on the Fielding stage through March 22.  Be sure to check out the special "Mom's Night Out" package to take in this show!