Beyond the Nest Reviews Geva Theatre Center's Production of Hair 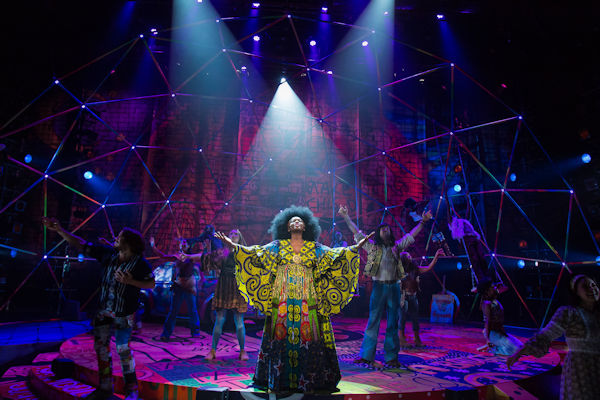 Hair splashes across the Wilson stage of Geva Theatre Center with joyous abandon. This American Tribal Love-Rock Musical, with its culture-shattering rebellion, shocked and outraged my parents’ generation when it first appeared on Broadway in 1968. Now, it offers a fun, nostalgic, psychedelic trip back to a counterculture whose ripple effect shaped and influenced art, music, fashion, religion, and thought for years to come, even into contemporary times.

If Wikipedia is to be believed, under 0.2% of the population actually identified as hippies. Yet this youth movement, which started in New York City's Greenwich Village and San Francisco's Haight-Ashbury district, spread to many countries around the world, causing Gerome Ragni and James Rado to create book and lyrics in celebration.

When it debuted in 1968, the play was innovative, not only in content, but in structure. The focus is on the music and the play’s anti-establishment themes, rather than plot.  Claude, and his gut-wrenching decision of whether or not to burn his draft card and enter the Vietnam War, is a central character around which conversations swirl in glorious song, about the anti-war movement, the sexual revolution, race relations, the drug culture, environmental concerns, and religion. It would be unfair if I were to single out any one individual for a stand-alone accolade, so extraordinary were the voices of this 18-person cast. In fact, from the moment Dionne (Cherise Thomas) enters through the aisles singing “Aquarius,” we know we are in for a musical joy ride. As each character takes up the musical gauntlet, giving us a peek at his or her life – and sometimes, body – we celebrate an era that, now, seems more foreign than familiar. 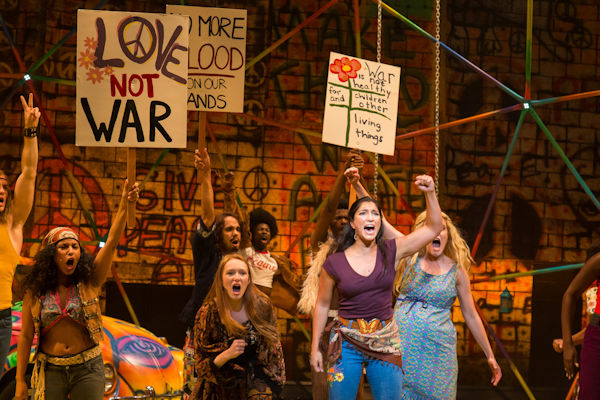 Geva’s minimalist kaleidoscopic set by Adam Koch, and bohemian garb, by costume designer Kevin Kopenhaver, catapult us back to the era of the Love Child where freedom reigns and “love abounds.” Many of the songs, such as “Hair,” “Easy to Be Hard, “Good Morning Starshine,” and “Let the Sun Shine In” became anthems of the age. An orchestra, superbly directed by Don Kot, performs live beneath the word-soaked floorboards of the stage, adding drive to the lyrics. Under the directorial magic of Melissa Rain Anderson, the stage swirls in life and passion, song and dance, flowing seamlessly like smoke from a hookah.

I found it astounding how many of the messages delivered in this musical, created 50 years ago, resonated as true today as they did then. I also kept wondering how many in the audience participated in that “scene,” and what it was like for this production’s young actors to portray characters so wildly different and less conservative than I think of as the temperament of today’s millennials and generation Z.

If you enjoy great musical theatre, and you lived through the 60s or are simply curious about that time, don’t miss this production! Recommended for those over age 18, Hair can be seen live onstage at Geva Theatre Center through October 7. It’s definitely a “Trip,” in more ways than one!

P.S. If you do go, be prepared to have the songs swirling around in your head for days!