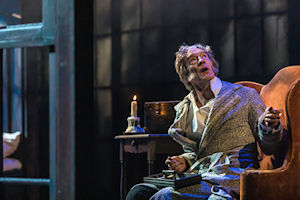 - Several years ago, I interviewed Geva’s Artistic Director, Mark Cuddy, for a behind-the-scenes look at Geva’s production of A Christmas Carol.  At that time, he shared that throughout his career, he had produced quite a few versions of the time-honored Dickens classic, but he had never previously directed it. When Geva decided it was time to revitalize the one the theatre had been presenting when he arrived, Mark did a lot of research and exploration to determine what worked onstage, and to eliminate what didn’t. That strategy worked very well. The adaptation he created sparkles with holiday magic and joy, as well as quite a few well-placed comedic moments.

The talented cast of A Christmas Carol is composed of Equity actors in the principle roles, local child actors and regional adult actors, who weave together a striking production that is a rich tapestry of story and song.

I saw the production in 2017 for the first time, and loved it. Yet I was amazed to see how wonderfully similar, yet marvelously different this year's production was.

Guy Paul returns as Ebenezer Scrooge, after a short hiatus, and he is a joy to behold. Even as the curmudgeonly, crusty, nasty-tempered Scrooge, you see the slightest glimmer of the man he will become following the series of visitations that transform him into a giddy, generous benefactor. What makes his Scrooge so memorable is that Guy Paul excels at physical humor. Through both action and timing, he provides comic relief at just the right moments. He and others in this lustrous cast use humor to add levity to a solemn tale, giving this production its sparkling quality.

Many actors from last year's production -- Robert Adelman Hancock as Fred, Garfield Hammonds as the Ghost of Jacob Marley, Joel Blum as Mr. Fezziwig, Tess DeFlyer as Belle, and Jean McCormick -- have reclaimed previouis roles, all playing multiple parts. I felt as if they were old friends and was delighted to see these consummate professionals return in this year's production. Sommer Carbuccia, who makes his Geva debut, gives us a heartwarming Bob Cratchit who finds joy and humor in life, despite his rather desperate situation. And of course, the children in the cast sprinkle magic throughout the show!

Greg Coffin’s music and lyrics are rich and memorable, transporting us to Merry Old England. It is rare to find a love song as hauntingly beautiful and sad as the one Tess DeFlyer as Belle sings, just before she breaks up with young Ebeneezer, realizing money has become more important to him than she is.

Charles Dickens’ novella, A Christmas Carol, was published in 1843 as a tale of hope and renewal that reaffirms the message of the season. Geva’s adaptation faithfully adheres to the story while adding a multi-faceted richness often missing from other productions.  I've seen many versions of this play, both onstage and on screen, and this one is a gem, and one of my favorite productions of this tale ever. If you've been to see A Christmas Carol before, I guarantee you'll be enchanted all over again. If you've never been to a production of it before, this is the one to see.

A Christmas Carol is on the Wilson Stage at Geva Theatre Center through Dec 29, 2018.

The Cast of Geva’s A Christmas Carol. Photo by Goat Factory Media Entertainment.