Review: Arizona Museum of Natural History | Kids Out and About Phoenix

My kids all go through phases of things that they are super interested in, and recently it's been dinosaurs.  So when I stumbled across the Arizona Museum of Natural History's website and realized they had a strong focus on dinosaurs, I knew that it was a place we would have to visit sooner rather than later.  I mean, let's face it - my kids change interests suddenly and without notice!

We didn't tell the kids where we were going until we arrived.  We had parked in a free public lot, right behind the museum and as we approached the entrance, there were dinosaur tracks painted on the sidewalk.  The kids enjoyed jumping from print to print as they guessed what kind of animal could have made those prints.  When they saw the dinosaur sculpture right outside the entrance they were super excited - but they had absolutely no idea what awaited when we opened those doors!

The main lobby was large and spacious and was full of really cool skeletons.  Some were freestanding and others were attached to the walls.  There was plenty to see while I was getting our tickets from the main desk. 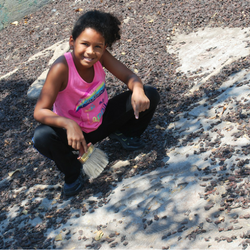 The Dino Zone was a really fun and interactive space for the kids.  There were learning stations with lights and buttons to push - and my kids sure do love pushing buttons!  The kids were excited to pose with dinosaurs and then see themselves on television screens, climbing through tunnels, and there was even a slide for the younger kids.  Right off of the DinoZone is an outdoor courtyard where you can pan for gold - it was a really cool experience to learn how to do that, and the museum provided little baggies so that you can bring home some of your fortunes!  The outdoor area had a really cool excavation area with tools for the kids to move the dust and rocks and uncover various dinosaur fossils.  I would definitely recommend hitting the outdoor courtyard early in the day - it is Arizona, and it does get hot out there!  The kids were so proud of their little gold nuggets and eager to get back into the AC and see some more dinosaurs. 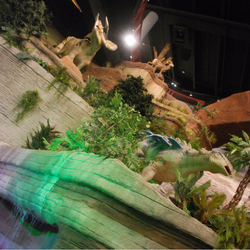 When I heard there was an area called "Dino Mountain," I knew it had to be cool - but I had no idea just HOW cool it would be.  The Dino Mountain spans 3 levels of the museum, and the Mountain is designed to look realistic, including animatronic dinosaurs! My kids loved watching them move around and roar.  There are even rainstorms and floods that occur periodically throughout the day.  The mountain is a pretty central feature for a large portion of the museum, and other exhibits surround Dino Mountain on all 3 floors - providing a variety of vantage points to see the dinosaurs.  Our favorite vantage point though, was from DInosaur Hall where we could see the magnificant skeletons of dinosaurs, read fun facts about them, and see pictures of what they likely looked like. 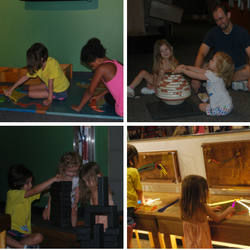 We really enjoyed that most of the exhibits focused on Arizona throughout history - even back when it was mostly water (which is crazy to think about).  There were exhibits on geology/rocks, astrology/outer space, and a variety of cultural history.  The kids loved playing in real territorial jail cells (my older kids got a HUGE kick out of the toilets - kids?!), and exploring a realistic cave/mine from the earliest days of our State.

All of the exhibits were family-friendly with activities to entertain the kids.  There were a variety of puzzles throughout the museum, allowing the kids to put together skeleton bones, make patterns, build pottery, and assemble maps.  There were some things that were not to be touched (it is a museum after all), but there were also plenty of opportunities for the kids to touch actual dinosaur bones, meteorites, and more.

We spent about 2 1/2 hours at the Museum.  Food and beverages (even water) are not allowed inside, but there are plenty of water fountains throughout the facility.  My husband and I were completely in awe of everything.  I am not sure exactly what we expected, but the Arizona Museum of Natural Science was like no museum we have visited before, and we were very impressed!  We loved learning about Arizona, as we recently moved here from NY, much of the information was new to us.

What did the kids have to say?

K, age 9: My favorite part was the dinosaurs.  It was really cool to see them look like they were alive!

E, age 3: When asked what her favorite part was, she said "The dinosaurs and the gold (panning)"

R, age 2:  When asked if she had fun seeing the dinosaurs, she said "Yesh"

We drove from Peoria to Mesa to visit the museum and it was totally worth it.  This is a place where I know we could visit again soon, and we'd still have a ton of fun exploring and learning , even more, things about the natural history of Arizona!  For current hours, admissions, special events, and more, visit: http://arizonamuseumofnaturalhistory.org/

Thanks to the Arizona Museum of Natural History for sponsoring this review. All opinions expressed are my own. See more pictures and details on Facebook and Instagram! Meg is a mommy blogger, Facebook marketer, and much more. She is a mom to four kids who live in Peoria, AZ and is the local Editor of KidsOutAndAbout Phoenix - helping parents and caregivers find free and affordable things to do with kids, out and about in Arizona. As a former Facebook employee, Meg remains a Facebook addict and handles KidsOutAndAbout.com's Social Media Marketing in addition to providing freelance services for other small businesses on how to best leverage Facebook as a part of their marketing strategy. Learn more about Meg at MegRyanne.com!