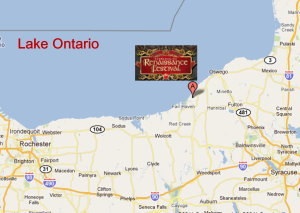 The Sterling Renaissance Festival is open on weekends in July and August in Sterling, New York, near Fairhaven Beach at the edge of Lake Ontario. In certain ways, it has the same goals as every regular festival of its kind: to entertain masses of people. The main difference with the Sterling Renaissance Festival is that it dispenses with the tacky plastic quality of these other kinds of festivals. It looks different. It feels different. You remember it very differently than you do the same-old-same-old.

Is it authentically "Renaissance"? Well, no. The skits are mostly the same kinds of jokes, the same kinds of spectacle, as other festivals and fairs... it's just done with an old-fashioned flair by people in nifty costumes, costumes that you are welcome to purchase yourself and become one with the action.

What to Know Before You Go

1) Most of the skits rely on modern humor. Back in Shakespearean times, they would have called it "ribald." Get my drift? This kind of humor tends to sail right over the heads of the 9-and-under set, and sends the 15-and-over set into fits of giggles. But preteens and young teens may be embarrassed. My 10-year-old understood little of it, and the 11- and 12-year-old with me shifted uncomfortably and often (so they said) wished they were elsewhere during the skits. Know this before you go, and make your plans accordingly. (However, I expect that during their kids weekend, held early in the summer, the skits are more family-friendly.)

2) Bring an extra $20/child so that kids under 10 can enjoy the rides. There are a lot of rides and games, and they are definitely NOT the same-old stuff that you see elsewhere. There is a Rat Splat and a Mud Mayhem contest. Ride a camel for $5. Make your way through a maze for $2. In the archery stalls, shoot 10 arrows for $2. The games are really what there are for young kids to do at the Festival; they won't understand the skits, and the only other thing there they'll want to do is eat. Speaking of which...

3) The Festival has the best variety of delicious, and even moderately healthful, food that I have experienced at a festival. It's pricey as it is everywhere ($2.50 for a very large and juicy pickle, $6 for a sausage sandwich that was too big for a 12-year-old growing boy to eat, $3 for a large salty pretzel). There are turkey legs to be had in abundance. This is NOT typical amusement park fare.

4) Wear costumes if you're into that. One thing that distinguishes this Festival from others is that you can't necessarily tell who works for the Festival and who is a guest; many guests get into the spirit of the Festival and wear the beautiful, colorful, flowing clothes that we have come to associate with the Renaissance and Shakespearean ages. Costumes are available to rent as well as buy, but come early for that because they tend to "rent out."

5) The Festival is held at truly beautiful venue, with hills and hollows, sun and dappled shade, charming little houses and stalls. It is very clean. My sense is that the Festival audience is not the kind to throw trash on the ground, but if it were, I suspect that it would be picked up very quickly. The staff there seemed proud of their work.

6) Despite being a Renaissance festival, this is not a history lesson. In 2011 when we visited, there was no Shakespeare being performed [2013 update: I have been told that there currently IS Shakespeare nowadays, which makes me very happy!]. This is entertainment, not education, with the exception of the glassblowing demonstration, which was very informative. My kids were fascinated.

7) Poor sports should steer clear. The Sterling Renaissance Festival web site says this is interactive entertainment. That is true. People are called out of the audience at every show, so be expected to play along. If you're feeling stick-in-the-mudish, another festival is for you.